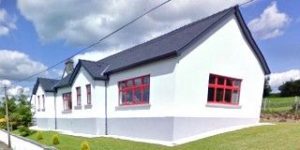 Our Lady’s National School is a modern, welcoming school set in the heart of the County Carlow countryside. We have two classes ranging from Junior Infants to 2nd class and 3rd to 6th class. We have a Special Education Teacher and Special Needs Assistant. Our school is greatly supported by our Parents Association.
Each classroom has an interactive whiteboard and is equipped with an extensive library, and laptops for the children’s educational use. We have a beautiful garden with Buddy Bench, basketball court, large playing field, a veggie patch, colourful shelter, and playground equipment.
One of the many benefits of being in a small school is that everyone knows everyone, and we all look out for one another. Small class sizes allow children to develop greater self-confidence, and their strengths and needs are discovered and nurtured. We encourage individuality, diversity, team-work and a community spirit.
School Tours, Grandparents’ Day, Fun days, Sports Day, World Book Day, Lá Glas, and Active Schools Week are just some elements of our school calendar!
Science and Maths – We have won awards for significant engagement in STEM subjects (Science, Technology, Engineering and Maths). We participate in Maths Week, Space Week, Science Week and Engineer’s Week each year.
Creativity – We endeavour to develop a love for the Arts in our school. We take a trip to see the Gaeity Panto each year. Every second year we participate in Funky Kids – a singing, dancing, drama and confidence-building workshop – which concludes with a spectacular show. Professional music teachers join us each year for choral and instrument instruction. Visual Arts (Painting, Clay, Drawing, Crafts etc.) are developed in line with the primary curriculum and we display the children’s artwork around the school.
Sports – Children get a taster for various sports throughout the year with visiting coaches and their class teacher, varying from Gaelic Football and Hurling to Tag Rugby and Basketball, Gymnastics and Orienteering. All classes are brought to swimming lessons each year.
Well-being – Teachers strive to create a happy learning environment for the children. Surrounded by nature, we also have ample outdoor learning opportunities. The children’s well-being is developed through relaxation and mindfulness activities, gardening, yoga and opportunities to play together in a safe, relaxed setting.
If you are interested in enrolling your child or children in Our Lady’s NS, we welcome you to contact us on 059 914 6297, or nurneyns@gmail.com. You can also make an appointment to visit us to have a look around and ask any questions you may have.